Nirvana Africa wholeheartedly supports the Dudek range of wings. As an industry leader, Dudek has once again made history with its latest range.

Dudek has built a reputation as one of the premium suppliers of paraglider wings in the world – the introduction of wings such as the Universal and the WRC Nucleon have made them the benchmark.

The Warp is Dudek’s latest offering for competition and XC experienced pilots searching for speed, agility and economy in one package.

Comparing it to our other performance designs, we can say that Warp is the bringing together of Snake XX and Hadron XX. Faster than both, it is as agile as Snake XX and efficient as Hadron XX. In thermal conditions, its behaviour is similar to a free-flying wing, with a good climb, glide and intuitive operation.

Designed purely for advanced pilots with winning in mind. We strongly recommend a minimum of 100 hours airtime on similar class (Snake, SnakeXX, Hadron, Hadron 1.1, HadronXX), with a minimum of 300 hours of total paramotor flight. These recommendations are not exaggerated, and we strongly advise you to take them seriously.

The Warp is a hybrid of 3 and 4-liner, since only such arrangement allows full adjustability of the profile geometry via the trimmer, speed and PA system (Power Attack) operation.

Shark-nose on the leading edge provides greater aerodynamics of the canopy and higher internal pressure at a wide range of angles of attack. The leading edge is stiffened with synthetic rods (Flexi Edge Technology), which significantly improve the launch quality and guard against deformations during high-speed flight. In addition, the leading edge is further stabilized by the reinforcements between the cells (LE2R technology – Leading Edge Double Reinforcements).

Some of the advantage of the Warp would be that it does not oscillate at max take-off load giving it very comfortable XC characteristics. It does not have tip steering because the tip steering has been integrated into main toggle brakes. This gives the glider incredible agility.

The glider is easier to launch than its predecessor, the Hadron XX. The is safer for launching in cross wind conditions and due to to Sharknose technology, comes up faster. Pioneers testing this glider in XC racing has found that it gives the same launch ground roll distance the same at varying altitudes. Therefore XC pilots can look forward to the a glider that is effective at all altitudes for the first time.

Slightly slower than our Dudek Warp, the Drift Air is designed for well qualified pilots that would like an agile glider for XC use. With great trim speed it does not lag behind the pilot during Take-off and includes some of the new technologies Dudek has been working on to control the pitch of the glider during pull-up. The glider can be compared with the Snake 1.2 but major advances make it one of the most exciting gliders to fly in the range. Very stable in turbulent conditions and with newer brake line system called the TCT (Triple Comfort Toggle) which combines Tip Steering and TCT+ handle. Very new and unique system for ultra comfort control input

The Hadron 3 is Dudek’s latest answer to make a comfortable, easy to use, XC glider that is very stable. Related to the Hadron XX the glider has been improved to have a easier launch, better controls and efficiency. The Hadron 3 is very stable in rough air and with a slighly lower speed rating then the Drift Air the glider is best suited for pilots that want a glider that provides reliability on launch, agile handing with its 2D steering and TCT +handle system same as found on the Drift Air. Consider this glider if you are looking for something to give you a fantastic playful experience or an easy cruiser for XC. 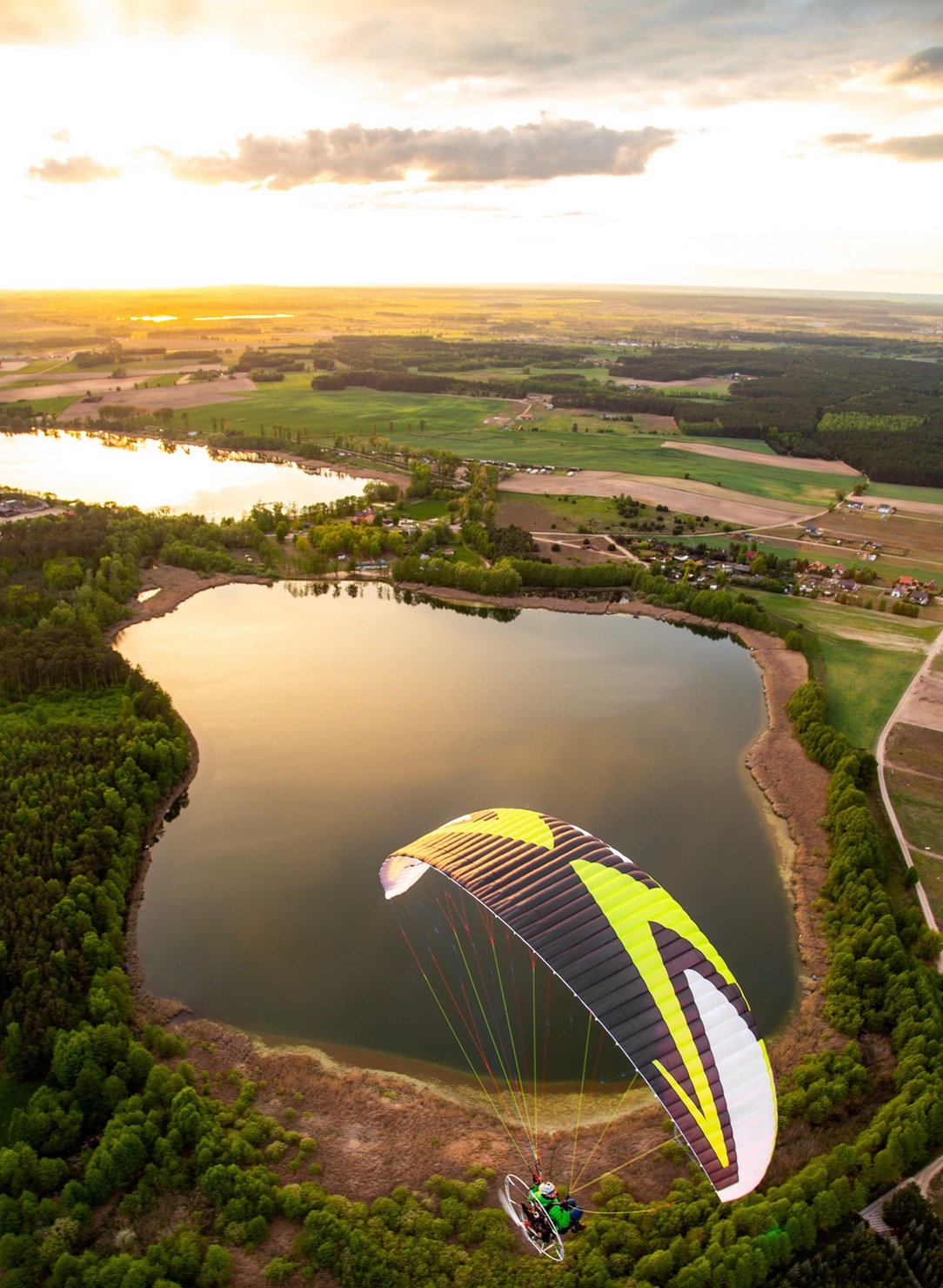 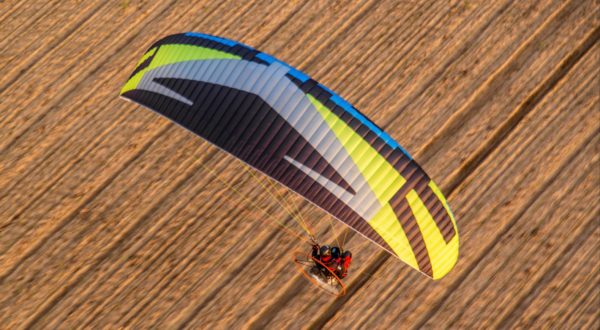 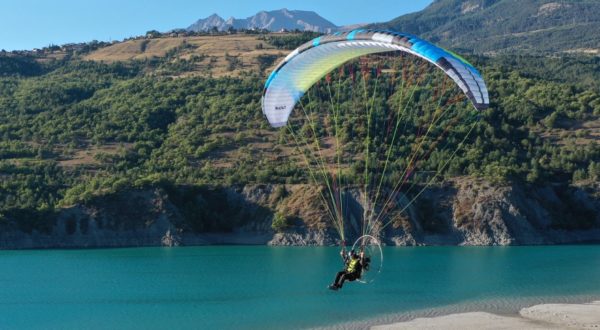 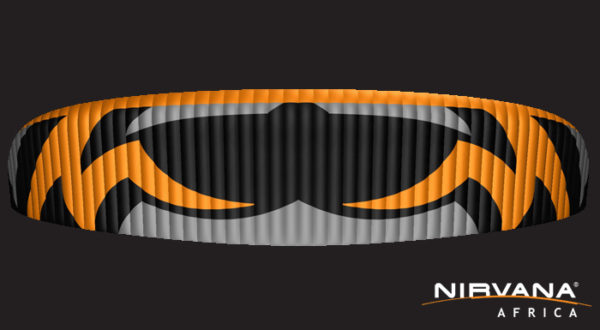 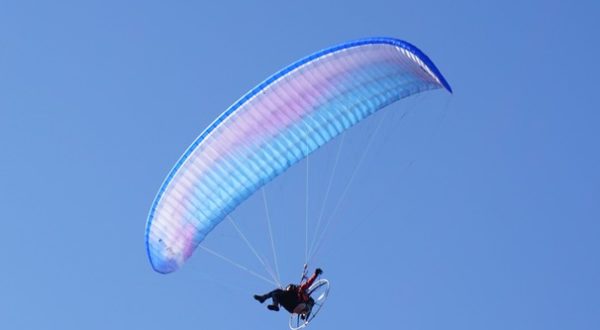 The Solo is the newest glider to the beginner-intermediate classification. Gliders that should be compared with it would be the Dudek Universal 1.1 and the Dudek Synthesis 2. The Solo brings the latest technology of easy launching gliders to the beginner market with light steering controls, launch characteristics that ensure the glider does not overshoot the pilot during pull-up and increased aspect ratio. A smaller glider giving the same or even more lift than a Universal 5-7 square meters larger in size, the Solo gives XC pilots the ability to have a beginner glider with improved fuel efficiency and better headwind penetration. Ideal for XC pilots that need to fly long distance. The “Sharknose” as present with the XX range and the Dudek Warp, will improve safety in rough air conditions. A 50/50 speed integration has been chosen for the Solo meaning it will have 50% of it top speed built into max trimmer and 50% built into the Speedbar. This is an important considers for a XC pilot that would like a 70/30 split as present with the Universal 1.1 and Warp.

Not quite ready for the Hadron yet? The Nucleon XX is your Glider!. More agile and with a faster take-off this model is “dedicated for the cross-country pilots”, middle echelon of competitors and weekend sight-seers. It is stable, safe, agile and very agreeable in steering.

A key feature is the Shark Nose profile, guaranteeing high pressure in “cell intakes area” ( which equals better safety) in full speed/angle of attack range. Also the 3D ballooning was taken into account even more precisely than earlier wings.

At high speeds the paraglider can be very precisely steered with new, improve, light TST handle. The Nucleon WRC is one of the best selling wings in South Africa and with the advancements made in this design the only compromise that you will have in your choice over the Nucleon WRC is a small reduction in top speed. However, with this compromise in mind you still gain advantages in the areas of faster/more stable take-off and a smaller aspect ratio.

Nucleon WRC is the essence of reflex profile in a new costume, applying Flexi Edge technology. The paraglider is designed both for recreational flyers and record/trophy hunters. Fast and agile like none other in its class. Perfect inflation and launch. This is a top drawer gear; the canopy is stable and safe both when flown at minimal and top speeds, with effective speedsystem and trims, precise steering and great agility. It is built to last, so that enormous forces generated in intensive use will not distort the profile over time.

Still leading the pack in South African sales when it come to “Dudek Gliders”, this wing has become extremely popular with individuals that use paramotoring as part of their work tasks. Used by military, ranchers, professional hunters, special game breeders, farmers, site planners to mention just a few careers, the wing has a great speed range and is extremely easy for take-off and ‘spot’ landings. If you are a career professional that needs to get airborne, this is the “wing of choice” for you that will see you through from ‘Beginner’ to ‘Sport Pilot’.

The Report Air is the result of years of development to create a working class glider for professionals. Law Enforcement, Conservationists and especially Photographers will be drawn to this glider because of this stability. The elements of this glider gives the pilot the ability to give less input and work with both hands on equipment during flight. To handle cameras during flight is no longer a problem and photographers can focus on getting that perfect shot!

Special Colors: Change the colors of your glider to make your own and unique design for only an additional 15% added to your price.