Your gateway to one of the safest and most adventurous forms of aviation.

We are pioneers in the production of commercials and digital content

Respected as a brand, tested in the field and proven by the Nirvana family of professional aviators.

Our entire range of products will open up a new and exciting world of adventure aviation for you. 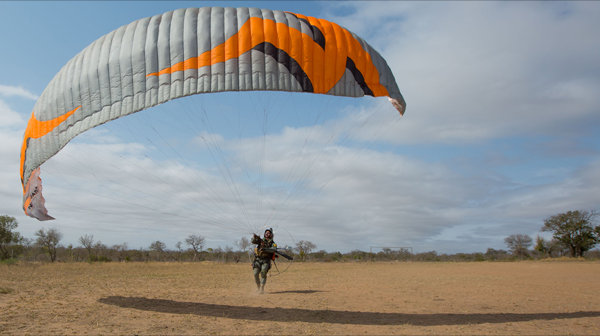 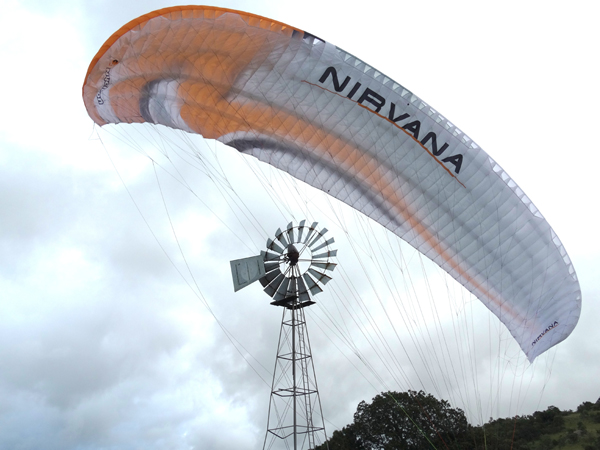 “Worth more than just pictures and statements of support…

– Nirvana Africa is the only PPG company in South Africa that has a dedicated team of pilots flying anti-poaching missions for park authorities (integrated into the ‘mission control’ of Kruger National Park).

Over the past 2 years both Nirvana and Nirvana Africa have made good on their pledge to use the technology to win the fight against endangered specie poaching, with special focus on the Rhino.

Special development has gone into giving the Nirvana Raptor Pilot the ability to have integrated communication platforms, body armor for protection, survival/medical gear for worst case scenarios and tactical fitments for rifles and smoke grenades.

Already proven and tested in the field after hundreds of hours of deployment, Nirvana Africa will launch its Project Raptor to the public within the coming weeks – watch this space”

For the Long Range Professional

The F-light with its options of 160cc engine or 200cc engine has become the Nirvana benchmark machine for X-Country flying.

The F-light 160 (F160) is the lightest of the bunch with various options that could bring its weight down to as little as 16.5kgs with the standard F160 weighing in at 20kgs.

The F160 is no slouch with 65kgs of Thrust aimed at pilots in the weight range of 50-75kgs. The machine comes standard with a 115cm frame making it ideal for the ladies offering a machine at equal weight to a TOP 80 engine model offered by our competitors but with twice the engine displacement and unrivalled mobility.

The F200 has replaced the Nirvana Instinct as our core offering. The reason for this has been the advancements made to the electronically controlled 200cc engine.

The engine is truly unique as it offers the client the option of economy or race performance.

Our X-Country racing teams have been hard at work to find the perfect balance and currently the BlueLine Racing propeller set (3 blade) gives the pilot consumption figures of up to 1.9 liters per hour.

The pilot can easily remove one propeller to convert it to a 2 blade configuration. This would increase acceleration dramatically and increase the RPM by up to 1000rpm more delivering thrust performance (increase on power-to-weight ratio over the Instinct 230).

The consumption figures range from 3 -4 liters per hour depending on the glider used once this option is used. The F200 weighs in at 22.5kgs with a camel back option that can host a water bladder for long range flying.

With a 10 liter tank pilots can look forward to flying for more than 3.5 hours (3 blade)

The F200 XC is our dedicated X-Country machine made for the aviator with no limits. The machine features a carbon fiber secondary fuel thank increasing capacity to 15.5 liters.

The twin tank machine has been designed with the idea that with fuel separated in separate tanks, the pilot will experience less difficulty handling a large amount of fuel during the ground handling phase of flight.

In 3 blade configuration the machine can offer up to 8 hours of continuous flying! Additionally the machine has high-hangpoints for improved flying comfort in extreme thermic conditions as well as a under seat reserve chute holder to free up space for the pilot on his chest and lap.

The F200XC is unrivalled in all aspects of its purposeful XC design. No other machine can offer selectable thrust options or a dedicated design for mobility.

Both the F200 and F200XC can be ordered with a cover that can convert the machine into a backpack for mobility once on the ground and having to use other forms of transport such as trains or vehicles to continue with a journey.

The F-light is made of our strongest carbon fiber and less flexible frame then former benchmark models. The aircraft grade aluminium struts are inexpensive to replace but offers increased strength.

The Twistair ‘paddles’ rivet onto the struts and eliminate the ’torque affect’ than can severely affect pilots during the take-off phase.

Twistair also allows the pilot to get the most out of the glider performance as torque is eliminated to such an extent that ‘counter trim’ on the glider, at full power level, is almost entirely eliminated resulting in a higher top speed.

All our machines are electric start with no ‘hand crank’ options available. The new lightweight battery system weighs less than 200grams and give up to 50 starts without recharge. Each purchase comes with a car charger that will allow a full battery charge within minutes. 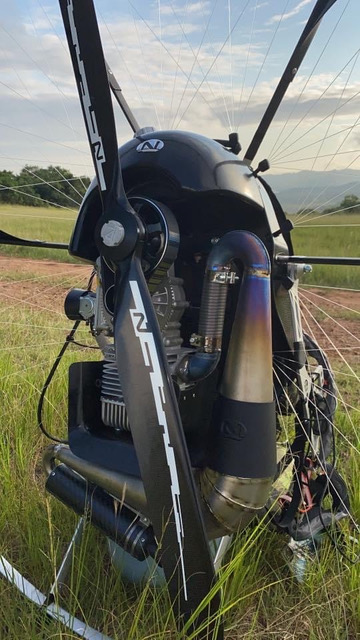 For the Working Pilot - Ranger

The Nirvana Ranger might be made in Czech Republic, but the conception of the machine originates from Africa where tough working tasks need to get done.

With Game Rangers, Farmers, Working Professionals and Military requiring a tougher frame, lightweight design but still combined with strong thrust – the Ranger was born to fill the gab.

The Ranger borrows some of the characteristics of the Instinct such as single ignition, ergonomic throttle, comfortable long range flying harness and the ‘silencer’ box to quiet the engine by a few decibels.

This is where the relation ends, for the Ranger integrates a new strategy with new technologies. The high center of gravity and smaller fuel tank provides more leg movement for the pilot to handle tougher terrain for the take-off and landing. The Silencer box has an clever integrated deicing system that directs hot air from the exhaust to the air intake which allows for longer glides at zero degree temperatures. The 3-blade pulse prop combined with this design produces a easier take-off with most pilots describing the effect as a ‘punch thrust’ with the faster RPM producing a strong initial ‘push’ for takeoff.

The Ngadget 3 instruments give pilots a great idea of the operating temperature and already allows for future integrations of fuel level and fuel use coming soon.

The Ranger has tactical already fixed on the harness which allows Rangers and other military personnel to fit their rifles for use in the field. Nirvana Africa assists professionals in making safe adjustments to their gear using hundreds of hours of testing my the development team. 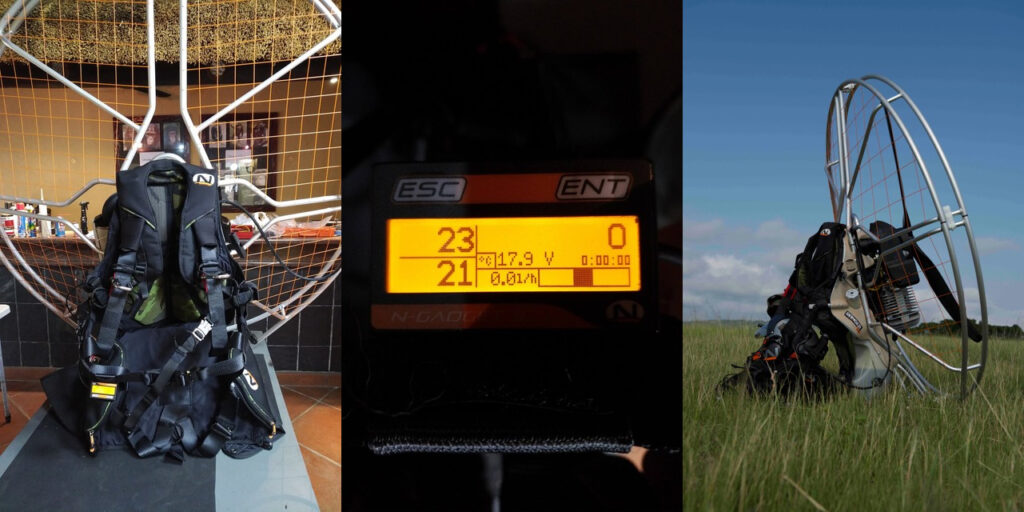 The reinvention of a classic – The Rodeo Revolution 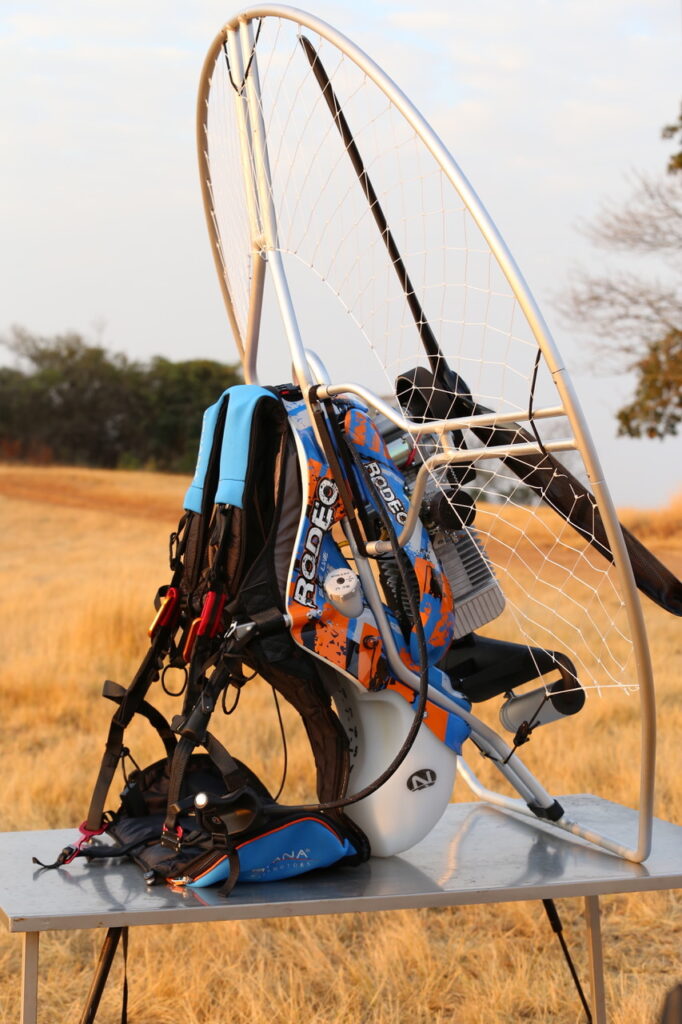 The Revolution utilises a new 3 blade 125cm propeller specially designed for this machine as well as electric start/stop ignition system. One button to do both ignition and stop of the engine gives this platform enhanced abilities the old Rodeo machine could not offer. The Revolution also has the Center Bolt propeller mounting system as found on the more expensive machines, doing away with the 6-bolt reducer. The machine is intended for the Sport Pilot that likes performance but at a more affordable price.

The rodeo gives great performance figures on 3 -blade configuration meant for economic flying of up to 3.5 hours. With the addition of 2 -spacers the 3 blade simply changes to a 2 blade and the performance changes to a strong racing machine meant for high acceleration and strong climb rate that will even out climb our 230cc units. As standard the elbow bend will be prepared to take temperature sensors required for pilots that will wish to fly high performance mode in order to make sure the engine stays with acceptable performance figures. The N-gadget instrumentation with spacers can be purchased as after market addition.

The Rodeo Revolution offers allot of the advantages present in our other more expensive products but does not concede in quality or appeal.

Light weight redesigned harness with underseat chute optional. The high hangpoints will be welcomed by the users and lovers of the pilot hanging position during flight.

The electric start is is also powered by the new lightweight Lithium battery that charges by means of a 220v charger or car charger.

Torque is eliminated with a anti-torque belt easily engaged by the pilot.

…whether you are an aspiring pilot or a professional that will not settle for anything but the best.

View all News
View all projects